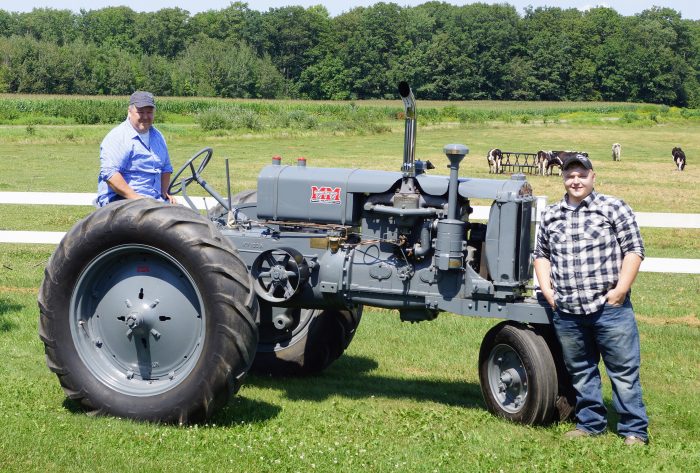 Thank you for choosing to spend some time with us! To start us off I have put together an article about one of my favorite vintage machines, my 1938 Minneapolis Moline MTA.

I and this tractor’s story starts back in early 2007 when I needed a project for an Ag Mechanics class. My Dad happened to have an old Minneapolis Moline sitting in the corner of the shed. After a short conversation we walked in the old machine shed and there it sat in the far corner all alone. This forgotten piece of history was looking rough at best, it hadn’t moved in a decade and the tires had sunk into the shed floor to the rims, the front tires were completely flat and seemed to be rotting right off the rims. The engine was covered in a bed sheet, and when I grabbed the sheet and gave it a tug it revealed more work to be done. The engine block stared back at me without its head, manifolds, magneto, or anything else beyond its rusty pistons and head studs. In hindsight this would have been a fantastic opportunity to snap a photo, however, as I didn’t you will have mentally picture what we started with. 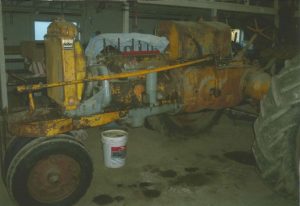 After getting some air in the rear tires, finding a chain, and getting grandpa’s Super M started we went about extracting the Minneapolis from its hiding place. After a few minutes of moving accumulated junk and getting the two tractors hooked up, I took the seat for the first time. Looking back now it seems almost comical how little it meant at the time. I could never have imagined the sights I’d see and the places that seat would take me. As the tractor emerged from the shed I could see this tractor wasn’t like the other Minneapolis’s I had seen, under a thick scaly layer of prairie gold this tractors Twin City heritage was all too evident. My dad plodded along on his dads Super M as we rounded the corner and he pulled me into the farm shop.

Once in the farm shop, the tractor and I started on a new journey. As some of you know parts can be very hard to find for the lesser-known tractors of yesteryear, so we wasted no time in accumulating the parts we had around. My father is a very smart guy and had been quietly accumulating parts for that tractor for many years. He got everything from a donor engine to a spare radiator, without his fore thought we could never have finished with such a beautiful tractor. He gathered parts from many sources, farm auctions, online sales and salvage yards. After finding everything he had been squirreling away we took to loading the donor engine in the back of my truck so I could head to school with my new project.

I proceeded to unload and start tearing down the KT283 engine, the High School I attended had a small shop that was equipped to rebuild small block Chevy’s and not much else. The big heavy mountain of Minneapolis engine was too heavy to put on the engine stands, so being the stubborn and strong willed young man I was, I grabbed an old pallet and set the engine on that to work. I spent a whole semester digging splinters out of my knees and crawling around on that dang pallet while I stripped the block. The donor engine had swallowed some water at some point in its life which had seized the pistons inside the bores. After attempting to remove the stuck piston with a chunk of 4X4 and a hammer with no success I stumbled upon another bit of good fortune. This is when I realized the KT 283 engine has a two part engine block, meaning the crankcase is separate from the cylinder block, this allowed me to removed just the cylinder block with the pistons and connecting rods still in the bores. This made the block small enough to fit in a 30-ton shop press, it is important to note that before pressing I soaked the pistons with penetrating oil for days. I continued my disassembly by pressing the pistons out of the bores, the 30-ton press had all it wanted to get those pistons moving and when they did give way it sounded like a 12 gauge going off in the shop. It took hours to get all four pistons free. After their removal I hit one of my first major road blocks, the pistons had trapped the water between the rings and pitted the pistons and bores beyond use. At this point, I had a stripped down the block and a cardboard box of rusted unusable parts. I headed home with my parts loaded on that same darn pallet I spent the previous 12 weeks crawling around on. I unloaded the parts and got my dad to give me his input, he agreed that the next step would be to get the engine machinists input on the extensive damage done by the water.

We took the engine pieces to our local engine machinist, he thought the cylinder pitting could be bored out of the cylinders but the pistons wouldn’t be usable. We had him grind the lifters and bore the cylinders to .030″ over. Finding pistons to fit this was not as easy, I spent days calling what seemed like every tractor salvage yard I could find a phone number for looking for a set of usable pistons. I found nothing, I was disappointed and didn’t know where else to look. So I enlisted the help of my father who enlisted the help of one of his friends, as you can probably guess his friend had no trouble in finding a set of pistons, unfortunately neither him nor myself could find a set to match the .030″ over bore. We once again turned to the engine machinist who had a stroke of genius when he suggested a trick he learned building dirt car engines, knurling stock pistons to fit a bigger bore. After getting the parts back from the machine shop we started putting the engine back together, assembly was fairly straight forward, we installed a freshly re-ground camshaft and a rebuilt head that my father had in storage from the tractors previous life. (That is a story for another time) 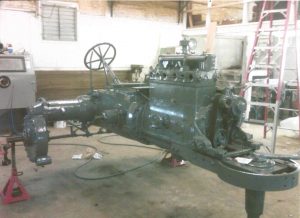 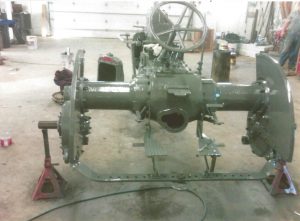 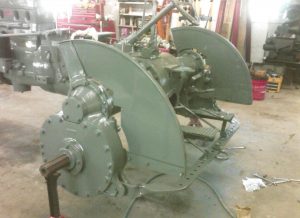 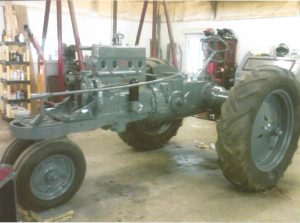 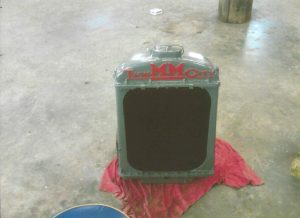 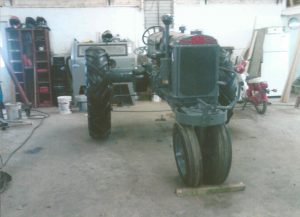 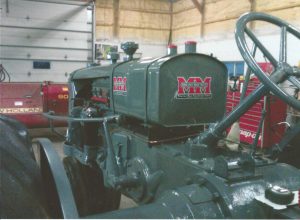 After getting the engine assembled we split the tractor and installed the rebuilt engine, we then did all the little things like rebuilding the Carburetor and installing the rebuilt magneto. Once the magneto was installed I spent an hour trying my hand at timing the magneto. We had everything in place we needed to see if that old girl would fire, so a quick splash of gasoline in the carb, and an eager young man on the “Armstrong” starter (Crank) we gave it a whirl. After a few rotations the engine roared to life, emitting a deafening roar from the open exhaust manifold. At this one exact moment I knew I was hooked for life. In this one moment this old tractor sparked a passion deep within me that burns even today. That same passion is what drove me and my father to finish what we started, we now had a running driving tractor that we could have said was enough of an accomplishment. But instead of stopping at good enough we decided to put in the work and do something we could be proud of. 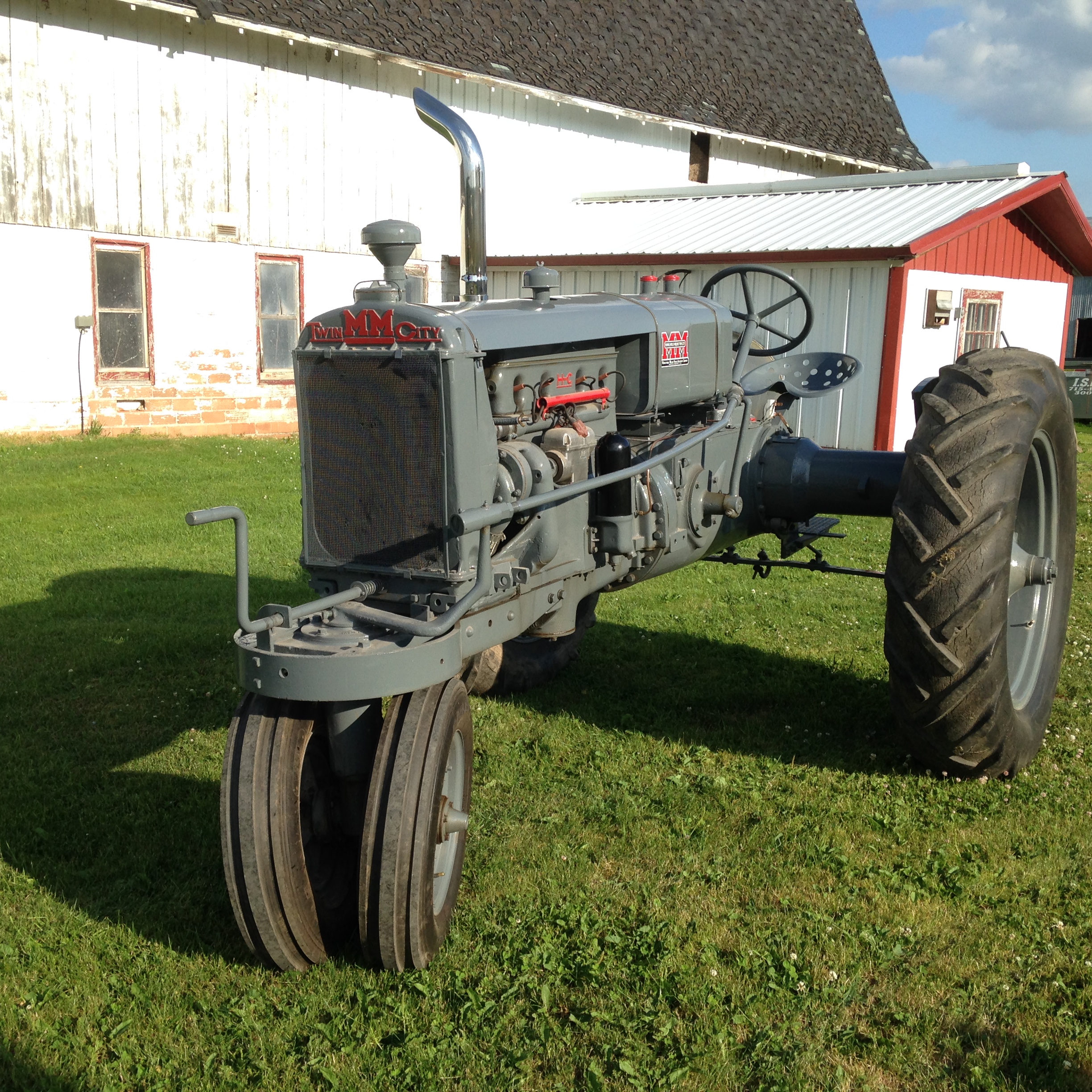 After hearing it run we started to tear it back apart removing the radiator, tins, wheels, seat, and anything else we couldn’t paint on the tractor. I took to the main castings with a grinder and wire wheels by the box. After hours upon hours of removing paint and parts, we were ready to paint the tractor. We hired the painting to be done by a family friend, and he re-fabricated the rear fenders from the rusted frames that were left from years of corrosion. He handled all of the body work and gave us an absolutely phenomenal paint job. We knew it would turn out top notch after seeing the paint work. As soon as the paint had dried we started bolting it back together. We took our time and minded every detail, polishing serial number plates, highlighting casting marks by hand painting them, polishing fuel lines and adding a new Thomure chrome stack to finish it all off.

I hope you have enjoyed reading my story on how my father and myself restored this classic tractor. I will most likely cover the history of this tractor in another article. Since completing this restoration we have taken it to many shows. This tractor made its most recent appearance at Rollag, MN for the WMSTR show. There is a quick shot of it on the WMSTR DVD this year. You may recognize it from the Hungry Hollow Show held in Rice Lake, WI, or the Almelund show held in Almelund, MN. I want to take a quick second and say thank you for taking the time to read my story. And I want to take a quick second to say thank you for all of the help from my friends, and most of all I want to give a huge thank you to my father who helped with every step of this process. 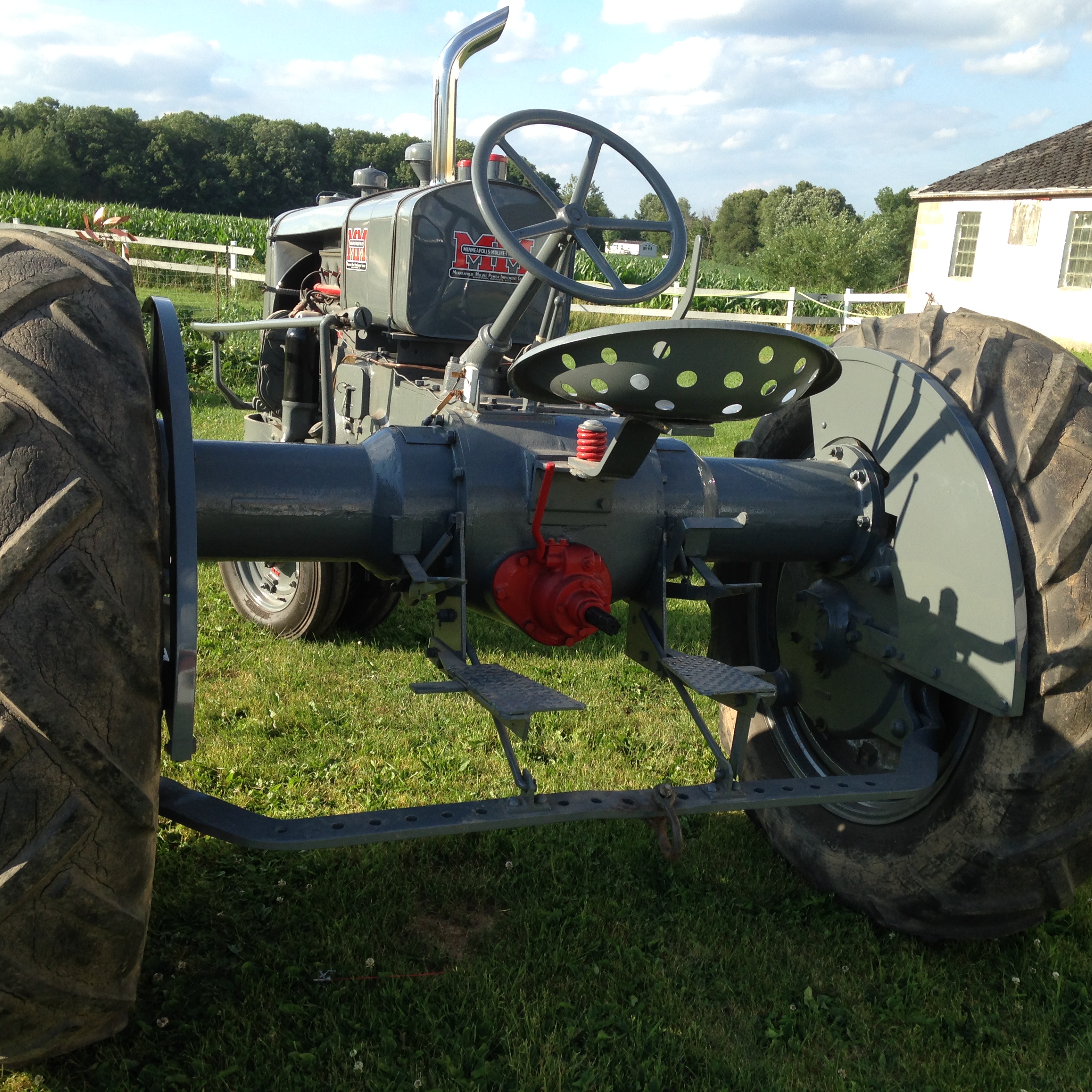 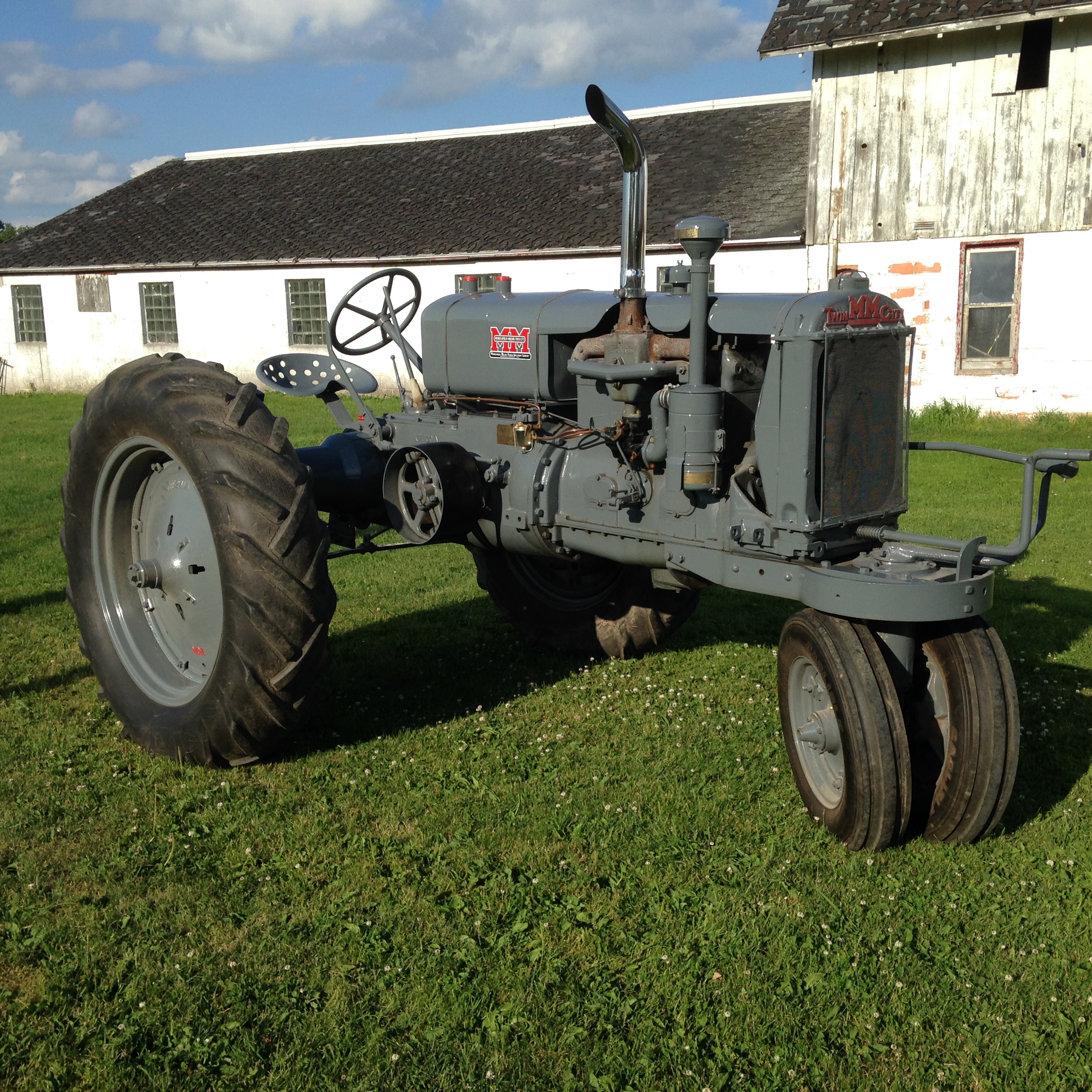