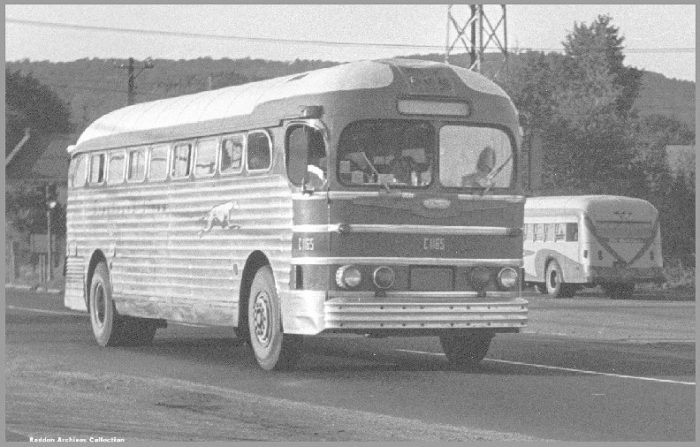 What comes to mind when you read, Yellow Coach Manufacturing Company PD3701? Probably nothing for most of you, but a few of you are grinning wildly right now, conjuring images of those big, gleaming round buses of the 1940’s, clad nose to tail in polished stainless steel. For those of you who haven’t figured out what we are talking about yet, we are taking some time this week to delve into the history of the Silverside bus. These buses were officially known as the PD3701, PD4101, PD3751, and PD4151. They were the crowning achievement for Yellow Coach Manufacturing Company in 1939. These buses were developed from 1938-1939 and were officially debuted at New York’s World’s Fair in 1939. The first silverside buses were manufactured and sold for only two years, during which time sales totaled 588 buses. By 1941 America’s manufacturers had turned their focus to the second World War, effectively halting production of the PD3701 and the PD4101. Immediately following the conclusion of World War Two, Greyhound was looking to develop a new bus design, however when their efforts failed they ordered 2000 new silverside buses to replace the dilapidated fleets that powered America through the wartime. (Plancho 2002) Greyhound made the move to update a third of its nationwide fleet in 1947 with a massive investment of $37,500,000.00. That’s equivalent to $421,102,325.58 in today’s money! 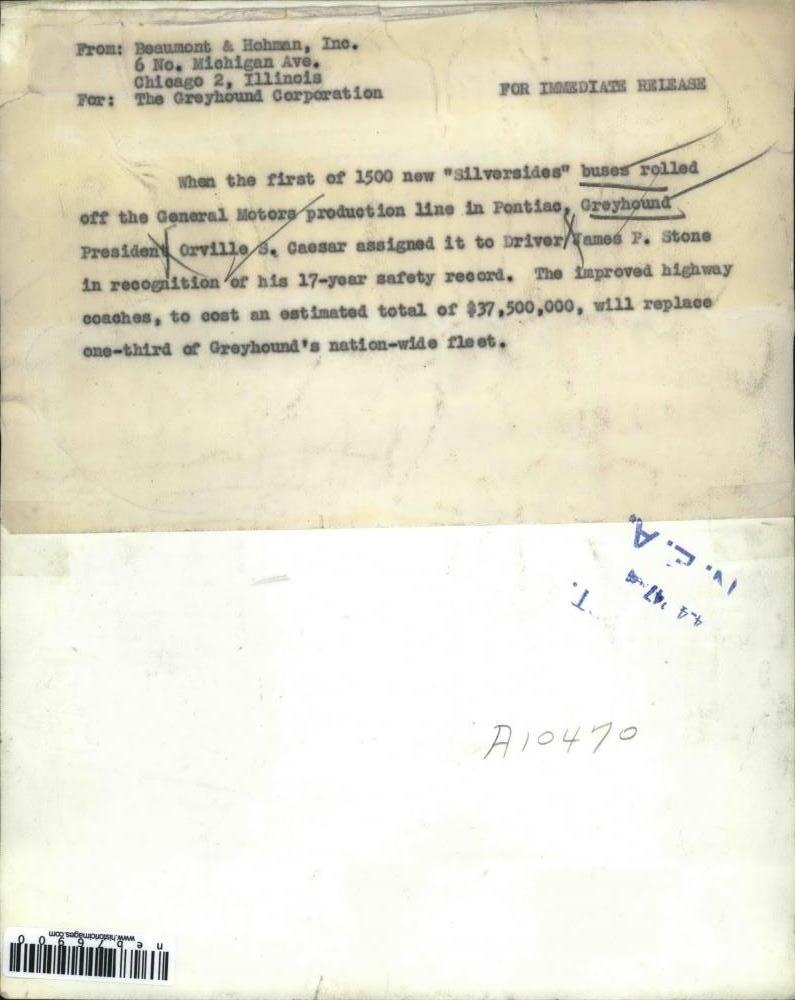 Per production records, 1,643 of the new Greyhounds would be the 37-passenger model PD3751, with the remaining 357 buses built as the, larger capacity, 41-passenger model PD4151. (Strauss 1988) The 1947-48 silverside buses built upon its predecessor’s success. To fully understand how groundbreaking some of the Silverside’s features were, we need to take a brief look at the history of the passenger bus in America.

In the early years of the passenger bus, and until the late 1930’s buses were built on heavy truck chassis that were powered by front mounted gasoline engines. It was common for them to have long hoods and luggage carriers affixed to the roof. Many of these early buses were powered by the time-tested Chevrolet Straight 6. While the Chevrolet straight 6 engines were reliable and numerous in their day they suffered from a lack of torque, and efficiency. These two shortfalls were the Achilles heel of the big displacement low RPM gasoline engines, that were popular in the early 1930’s. 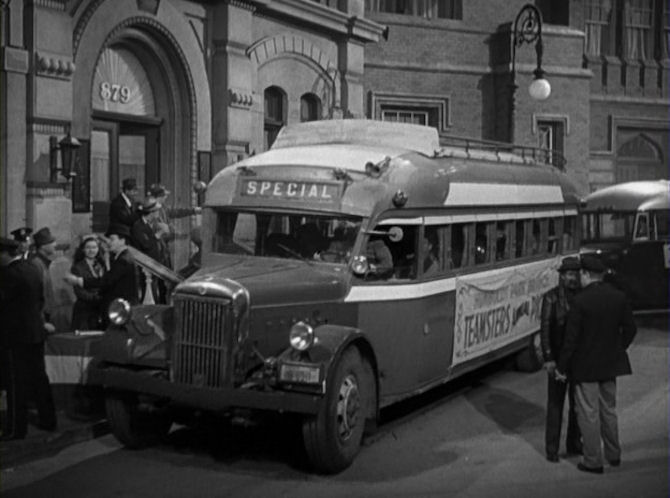 With these design pitfalls in mind, Yellow Coach enlisted the help of Dwight Austin and his angle drive gearbox design. In a paragraph from Larry Plachno’s 2002 article for National Bus Trader Magazine he highlights what Dwight’s design did for Yellow Coach Manufacturing.

” Dwight Austin was hired by Yellow Coach in 1934 and immediately began work on new transit bus models with transverse engines and the “V” angle drive. Austin and his staff also worked with Greyhound to develop a new highway coach. This emerged in 1936 as the model 719 “Super Coach.” When compared with the contemporary conventional highway buses, the 719 was revolutionary. Passengers sat on a raised deck and luggage was stored in enclosed bays under the floor instead of being strapped to the roof. The rear-mounted transverse engine with V-drive permitted a flat front design with increased visibility and maneuverability.” 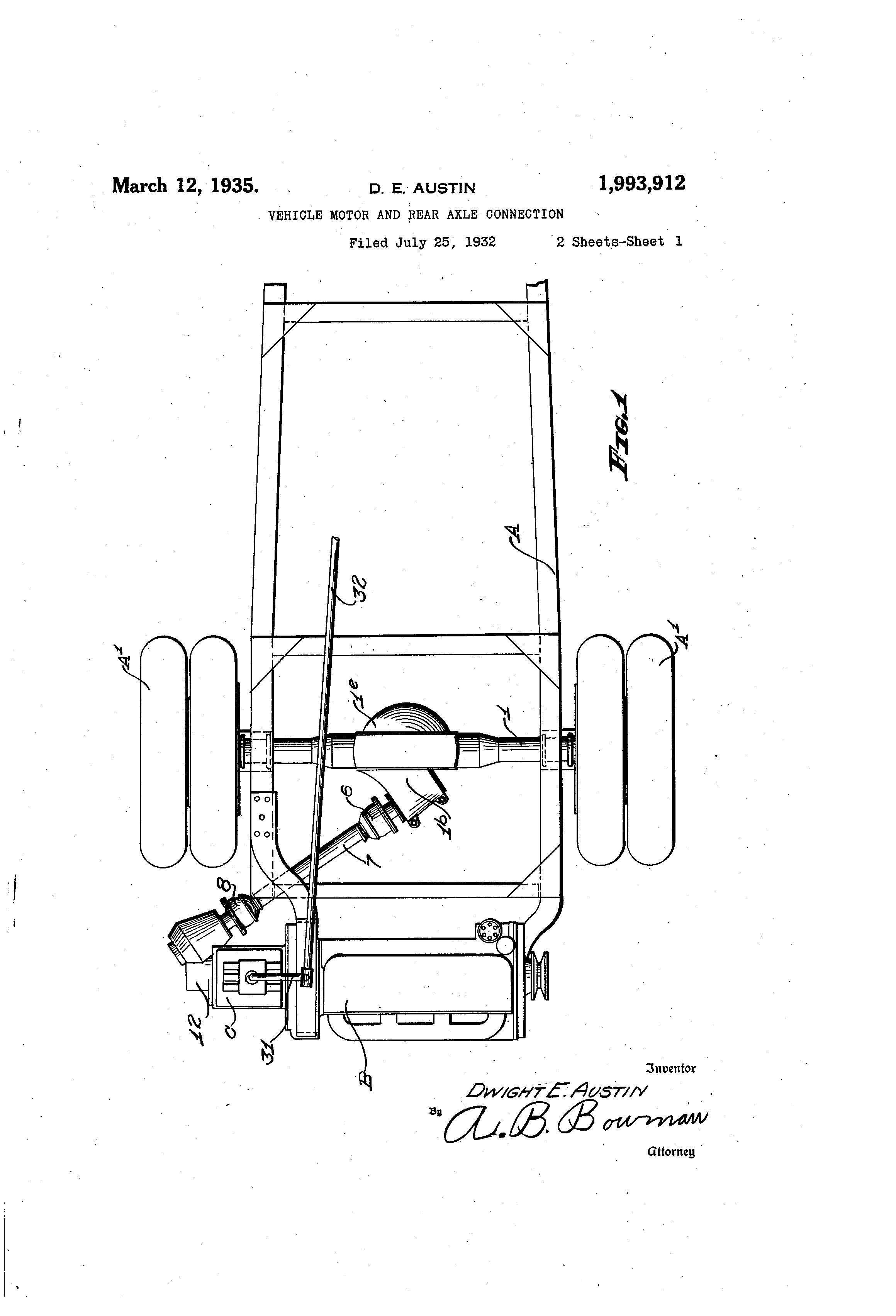 It is also worth mentioning that Austin’s design was key in allowing Yellow Coach to pioneer the monocoque bus chassis. In an unabashed example of genius Yellow Coach released the 743 just one year later, in 1937, and installed their parent company’s newest engine offering, the venerable Detroit Diesel. The new Detroit engines offered massive improvements in efficiency and power when compared to the Gasoline straight 6’s that were previously used. Also worth mentioning, is that the Yellow Coach 743 introduced air conditioning to commercial buses. 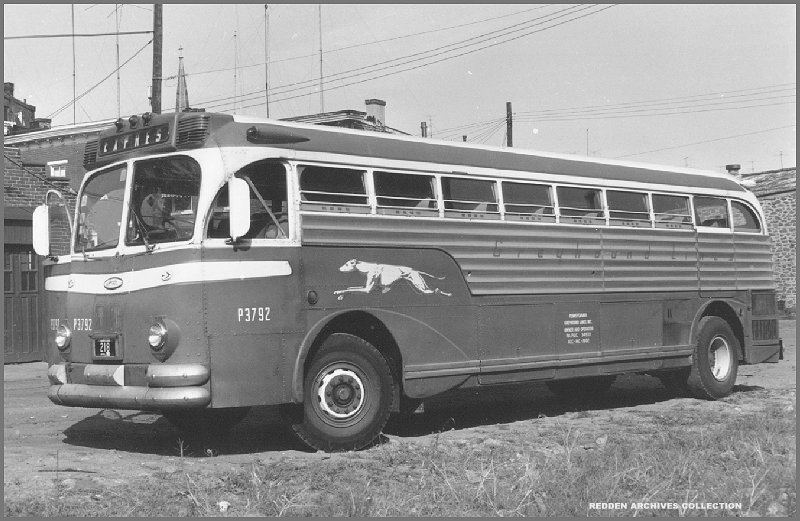 “In 1938, Greyhound approached Yellow Coach with the idea of putting silver siding on coaches to make them look modern and swift.”

When Greyhound approached Yellow Coach they undoubtedly had no idea how iconic their design would become, let alone develop an almost cult-like following from bus collectors and historians. The fluted and polished stainless exterior they chose for the buses gave them a modern look much like the Pioneer Zephyr Train that was popularized in the mid-1930’s. This, in turn, gave the buses their distinctive silversides and created a legend of the highways. The rounded body lines, polished exterior, and the deafening roar of the 6-71 Detroit made these buses unforgettable to anyone who had the good fortune to experience one. 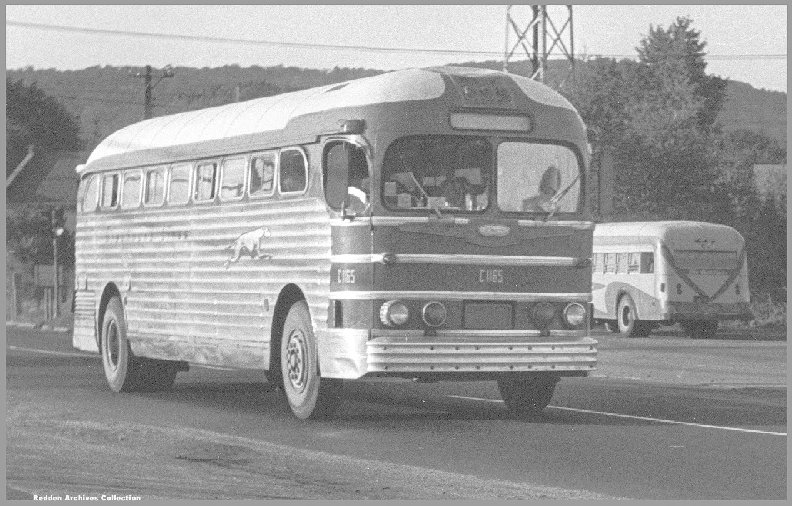 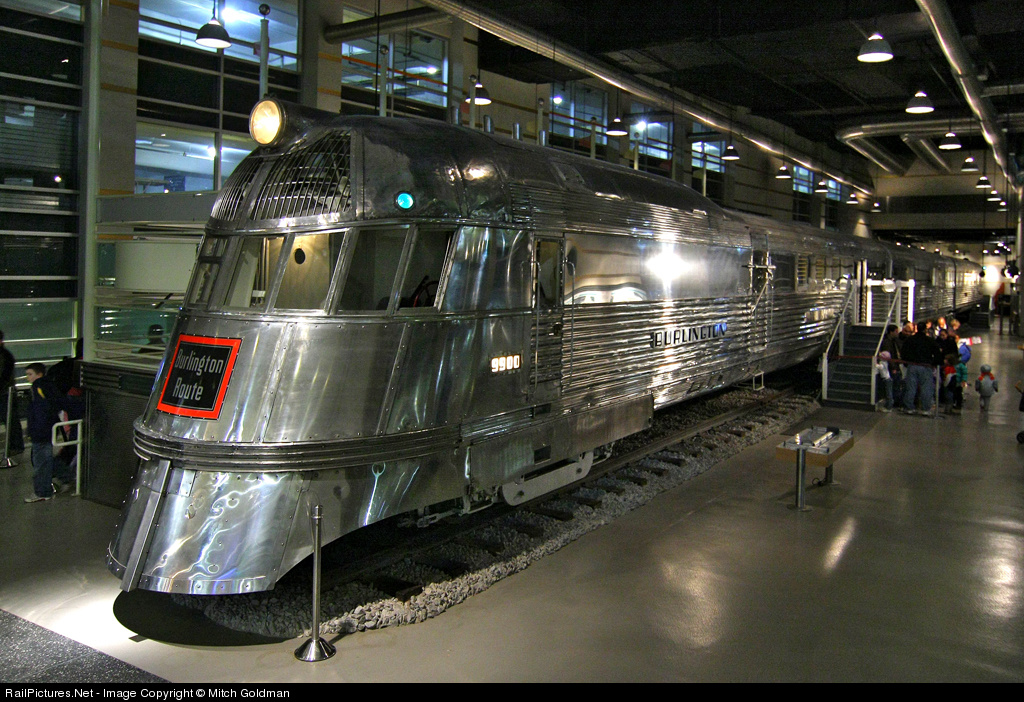 With a little background information, out of the way, let’s take a closer look at one of these buses up close and personal. The bus that we will look at is owned by a friend of mine, his name is Scott, and he is the proud owner of this 1948 PD3751. 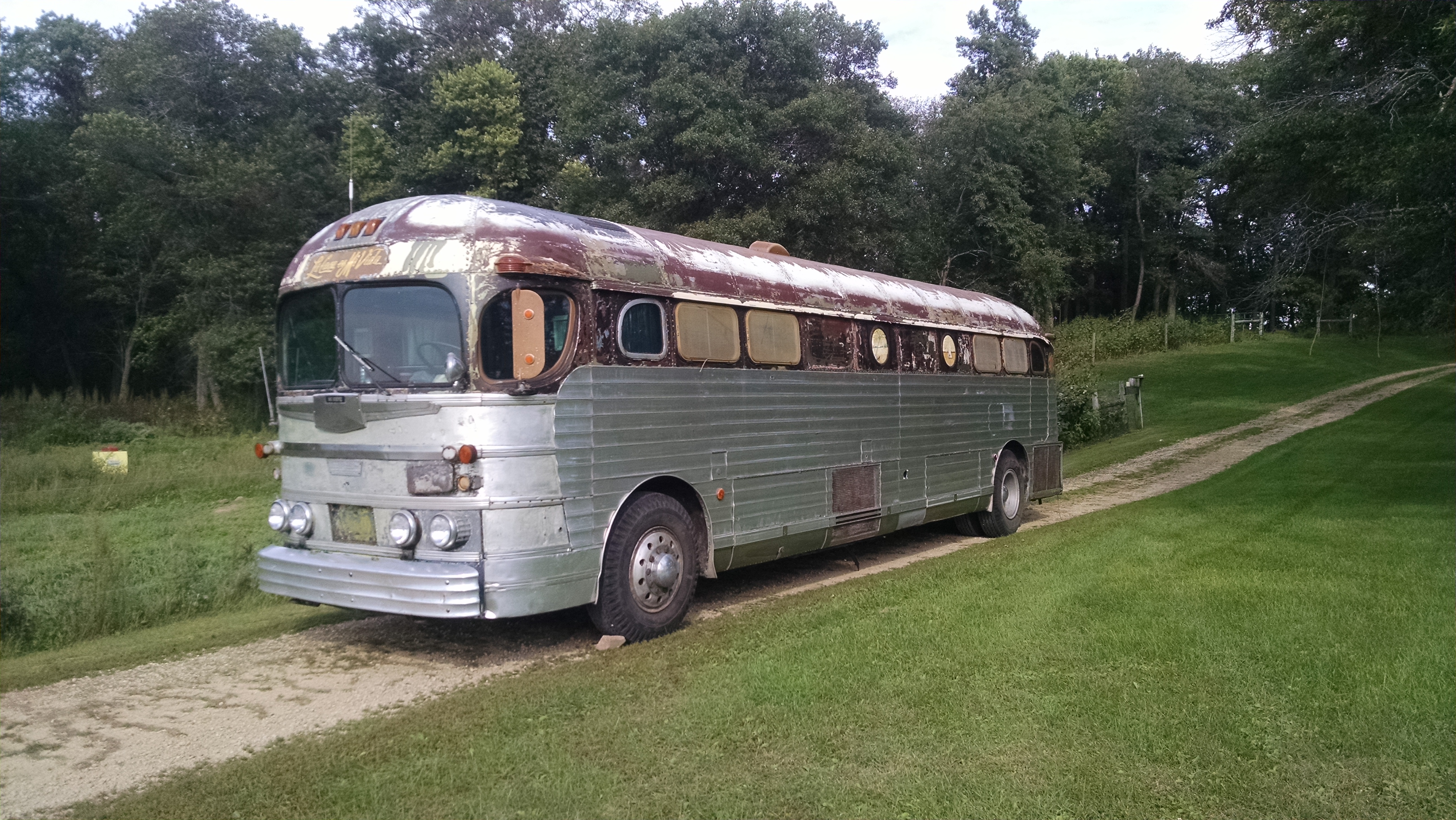 This bus started life as part of the Pennsylvania Greyhound Line’s fleet and was later used in and around Washington D.C. to bus Senators. It was later converted to a motor home by Custom Coaches sometime during the 1960’s, then after an unknown number of years spent traveling the highways in motor home form this bus made its way to Brainerd, MN, where an elderly couple put it to work driving to Mexico to escape the harsh Minnesota winters. With many years of trekking south and back north again, the bus found itself sitting idle in a shed for nearly twenty years. After one of the owners passing they decided to sell the bus. Scott happened to see the listing and immediately arranged to go look at this storied piece of history. After laying his own eyes upon it, he knew he had to have it, so money was exchanged and he was officially the proud owner of a silverside bus. The bus needed some work before it made the 4-hour journey home. A local shop was called to pick it up and give it the once over. They used a rollback trailer and winch to drag all 35’ of her beauty from that dusty hiding spot. In doing so they thrust those iconic body lines into the sunshine for the first time in nearly two decades. Upon getting it back to their shop they did the pertinent maintenance, replacing brake shoes, U-joints, and lubricants. They also successfully breathed life back into the Detroit, getting it running with some fresh fuel, oil, and filters. Once the bus was road ready Scott made the trip to Brainerd to bring his prized purchase home, he mentioned it was a very long trip home and he struggled with the steep learning curve of trying to figure out how to shift that Spicer 4 speed. After a few uphill stalls, missed shifts, and ground gears the bus and Scott made it home safe. He wasted no time in getting to work on it, pulling the old mattresses, appliances, generator, and plumbing from the bus. He then took to removing the years of paint from the distinctive silversides. He spent numerous hours with his paint stripper, putty knife, pressure washer, and orbital sander to get the bus looking like a silverside again. After his many hours of work, he decided to put his restoration project on hold for a while. He admitted the size and scope of this project were much more than he had anticipated. 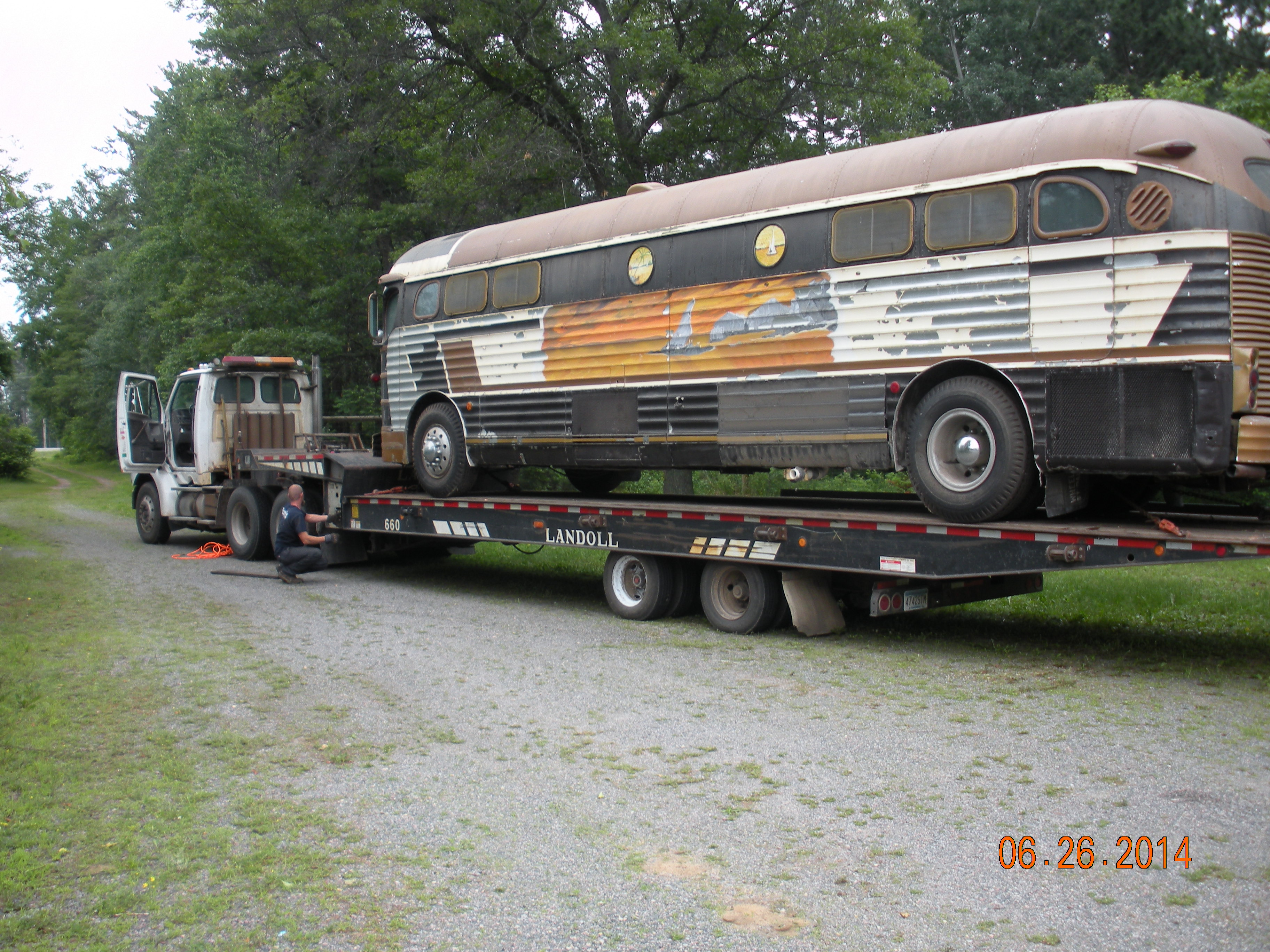 I want to show you some of the features of this bus, some of these features you will have seen in more modern applications, while some are better left in 1948. The First thing I want you to check out is the slide out steps that are connected to the entrance door, they slide out when the door opens and retract when it’s shut. This isn’t uncommon on vintage buses, modern buses dump air pressure in the front suspension to simply lower the steps closer to the ground. 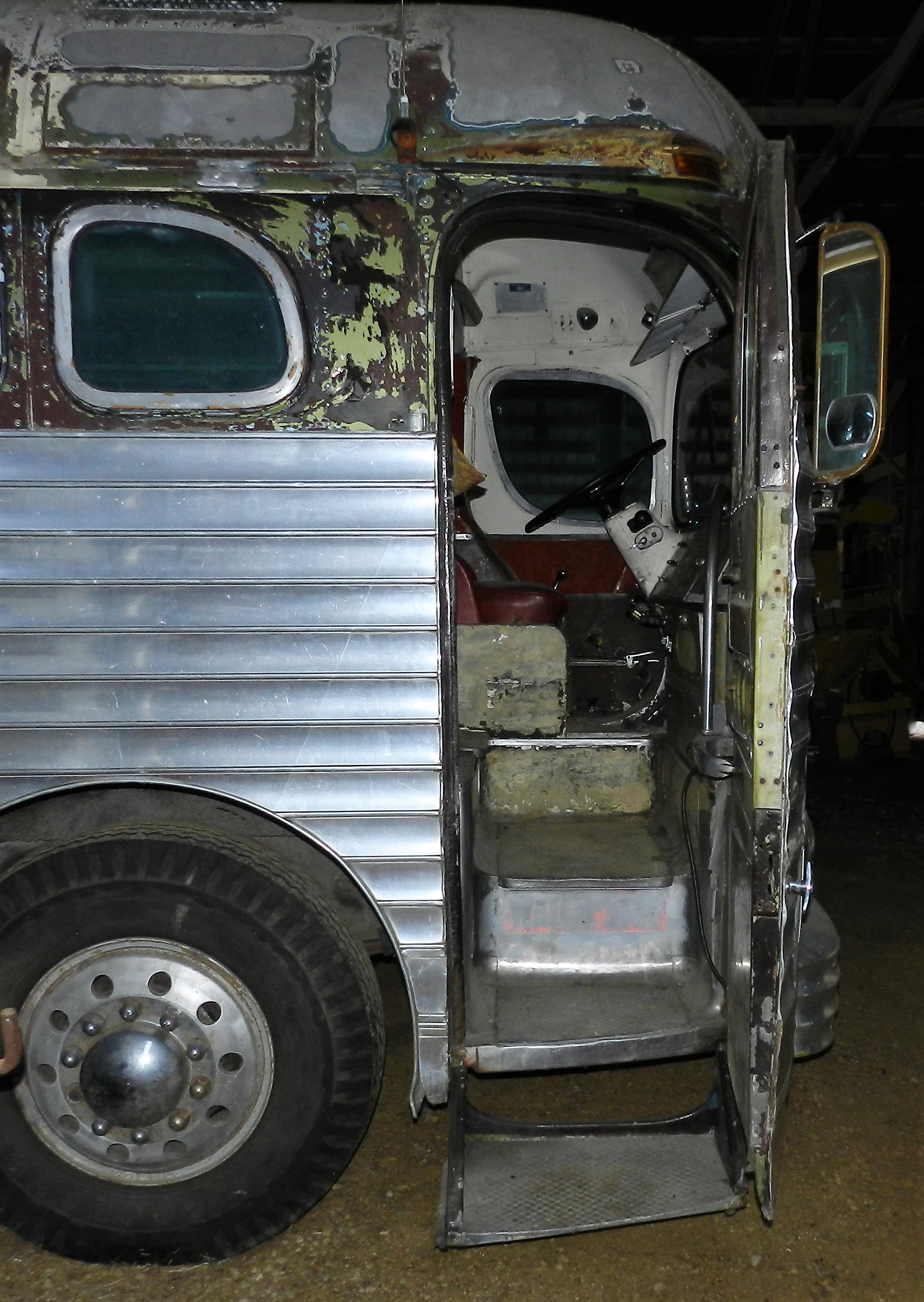 Secondly, I’d like to focus on the massive column shifter. The 1947-48 Silversides mated a column shifted, unsynchronized, aluminum, Spicer 4 Speed to the cross mounted Detroit Diesel 6-71 engine. Making this arguably one of the most difficult buses to drive proficiently. However, the mechanical shifter doesn’t feel heavy or awkward. It shifts the transmission smoothly and effectively even with all that linkage. 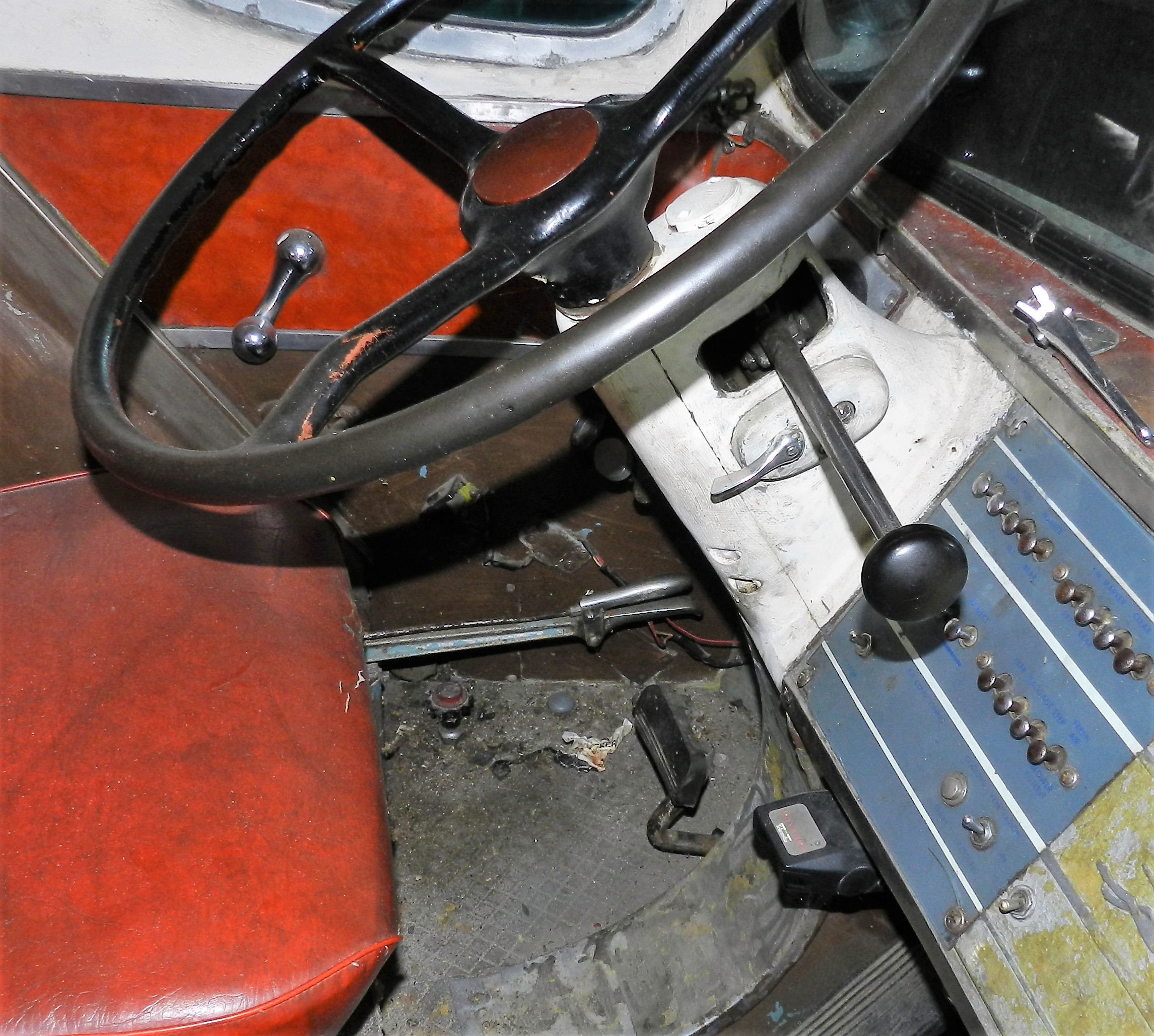 On the left side of the driver’s seat, you will notice the parking brake lever. Even with that lengthy handle, it takes two hands to set it.

The last thing I want to focus on would be the underfloor luggage storage. The flip up luggage doors get held up by chains that slide into slots on the exterior of the bus. 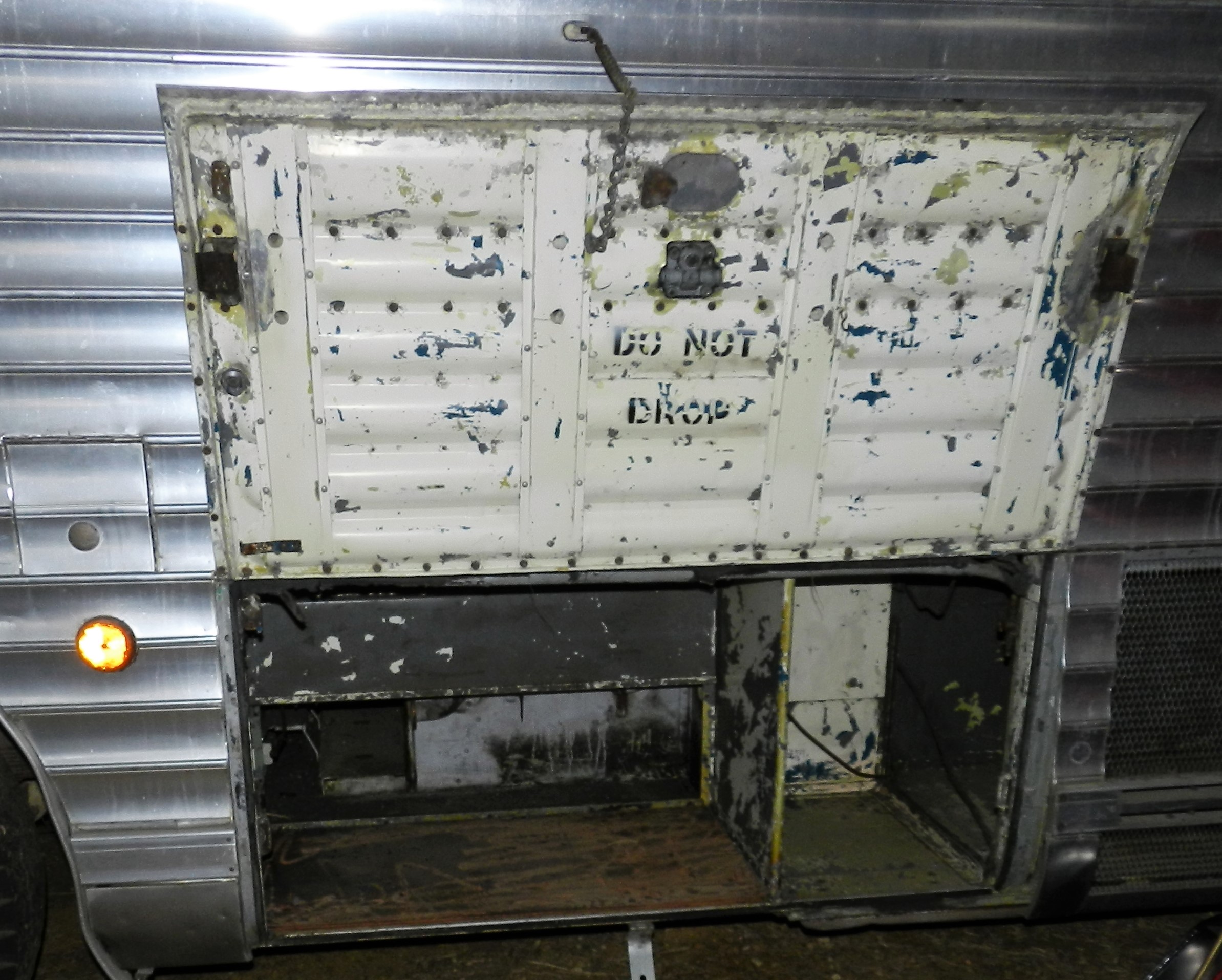 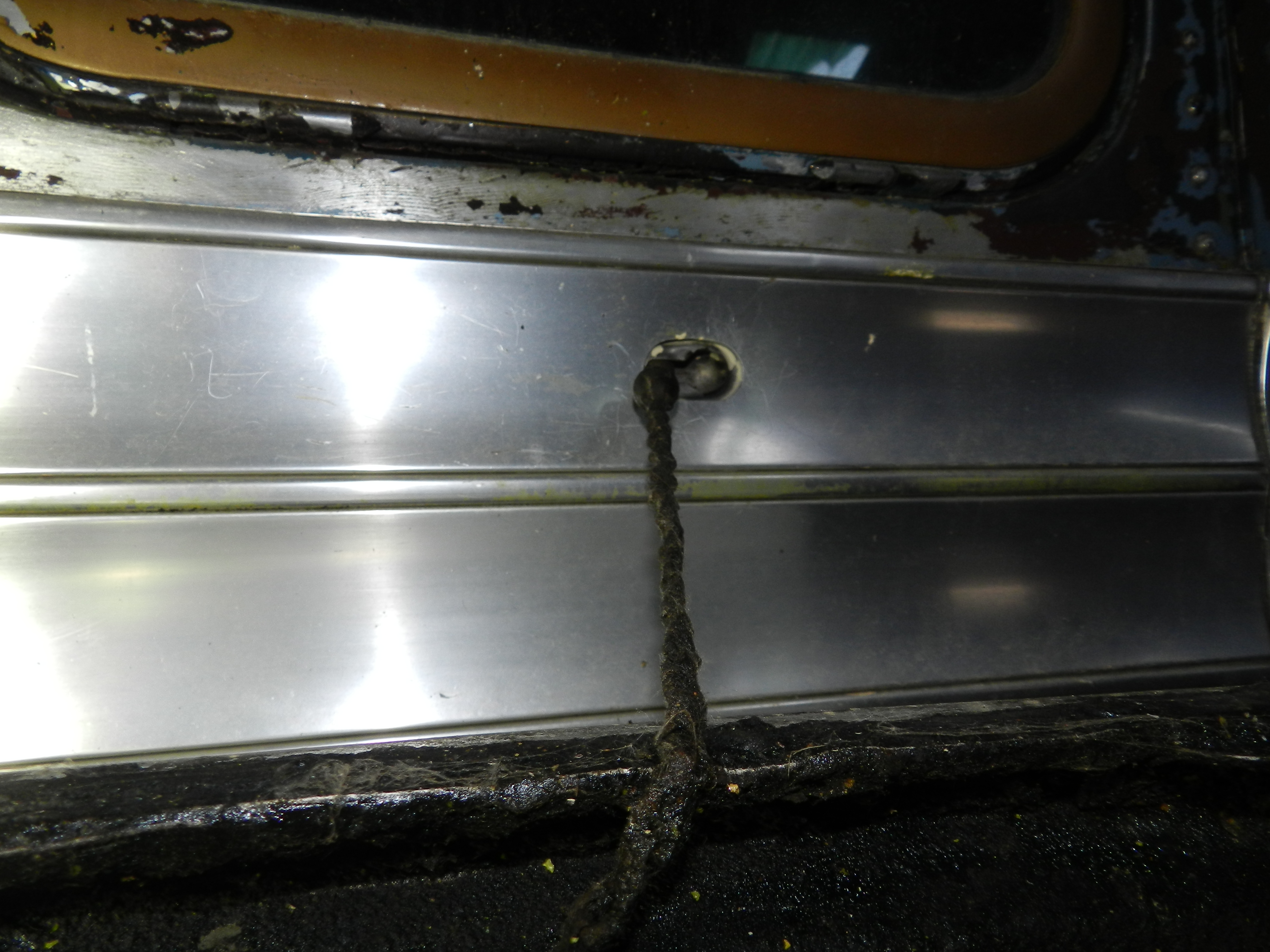 I hope you found this post interesting and continue to check back with us for more info on this project. Scott is planning on restoring the exterior to its 1948 glory and is planning a full restoration of the interior to its 1960’s glamour. We will continue to follow his progress as he gets this beauty back on the highways of America. Check Below for more features we didn’t mention. And as always thank you for reading Vintage Machinery.
Niedermeyer, Paul. “Curbside Classic: 1947 GM PD-3751 “Silversides” Greyhound Bus – The First Modern Diesel Bus.” The Truth About Cars. Autoguide.com, 09 Mar. 2011. Web. 07 Mar. 2017.