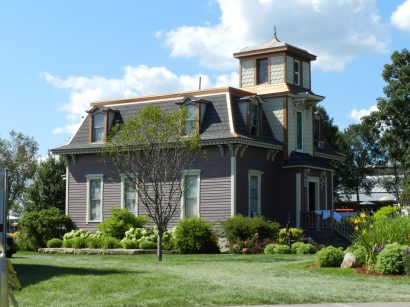 On the morning of July 29th, 2017, we decided to travel south to Hastings, MN for our first ever visit to the Little Log House Pioneer Village Antique Power Show. Upon our arrival, we walked through the entrance gate and immediately entered a stationary gas engine shed that was packed wall to wall with engines sputtering and popping away. The contents of this one display building warranted a few hours to fully appreciate, however through the open door at the far end of the building I saw a Big Four 30 that was gleaming in the sunlight. So, I did the only logical thing and made a direct beeline to the hulking mass of machine. To my surprise as I got closer it was revealed that there was not one but two Big Four’s parked shoulder to shoulder. I stood in their daunting presence and admired the detail their restorer had put into them. The detail was incredible, and not one bolt, washer or pinstripe was out of place on either tractor. After many loops circling both tractors and inspecting every intricate detail, I headed to the Flea Market. After looking through some boxes of old tractor parts, I made my way further into the show grounds where I was greeted by a selection of prairie tractors. I was pleasantly surprised to find the show was playing host to rarities like a Mogul 30-60, Aultman & Taylor 22-45, Fairbanks-Morse 15-25, Hart Parr 30-60, and a Flour City 40-72. I was grinning from ear to ear as I feverishly snapped as many pictures of these tractors as I could. Walking among these giants I was completely satisfied with my visit. However, as I emerged from the row of tractors I was again surprised by how many other displays and activities there were throughout the grounds. There was a tractor pull taking place on the far side of the grounds, the center of the show was bright with the reflecting sunlight off classic cars, and the hills in between myself and the car show were covered with tractors of all colors. On the far hillside, I could see vintage passenger buses, fire trucks, and semi-trucks. My ears were filled with the sounds of a Johnny Popper laboring away as it ran a threshing machine, a country and western band singing some tunes, and distant hand gunfire from the Cannon Old West Society re-enactments. I’ll admit I never know what to expect when visiting a show for the first time, but in the case of the Little Log House Antique Power Show, I was absolutely blown away by nearly every aspect of the show. The people were friendly, the grounds were painstakingly groomed, and most importantly the Vintage Machinery was everywhere! This show is unlike any other I have ever attended, featuring farm equipment, classic cars, vintage semi-trucks, buses, fire trucks, gas and oil memorabilia, a huge flea market, a World War 2 display, and a bevy of gorgeous old buildings. I honestly can’t say enough good things about this show, there is something for everyone to enjoy! So please do yourself a favor and go see what I am talking about for yourself.